I used pictures of bluebells last week partly because they had all vanished around here, just occasional clusters of purple on shaded verges, or north facing woodland slopes. And then we decided to go and climb the first mountain of the year and guess what we found? In late May.

I’ve got photographs of The Skirrid from various other hills in the Black Mountains and Brecon Beacons but I had never actually climbed it. Sitting apart from the other mountain ranges it looks like a shark’s fin cutting through the lowlands as you approach it from Hereford. It isn’t as high or demanding as many other hills and mountains we have climbed, “an evening stroll” was how Dr J described it and because it took us so long to get organised last week we did indeed come down through dusky woods to find the car park almost empty.

The most eye catching object from the car park was a perfect view of the nearby Sugar Loaf showing how it got its name. The initially steep climb through woodland was beautiful, plenty of other people going up and down but the trees were alive with birdsong and constant fleeting feathered movement.

I made the classic mistake once we were out on the ridge of thinking we were nearly at the summit, only to climb to a false peak and see the ridge rising on before me, it wasn’t too tiring though as stopping to look up at the skylarks singing out of sight was a constant delight. We had our first picnic break in a sheltered dip on the ridge, looking towards White Castle that we visited three years ago.

This is a fairly small hill by Welsh standards, 1594 feet or 486 metres and it really is a pleasant walk, our seven year old bounded ahead and walked twice as far as she needed to and the three year old didn’t demand a carry until the summit had been reached – although as we found two butterflies of different species chasing each other around the trig point the girls amused themselves in racing after them for a good 15 minutes showing that the walk hadn’t exhausted them nearly enough.

At the top a few scattered stones are all that remains of a medieval chapel and below the peak you can make out the bank and ditch of an Iron Age hillfort. The views in all directions are amazing– you can climb Welsh mountains all year and never be sure of the visibility at the top but we spent a lot of time trying to discern which of the mountains to our west we had climbed before and which we still had to look forward to. To the east May Hill, Bredon Hill and the Malverns were all clear, Clee Hill to the north in Shropshire and some further ridge that we couldn’t name for sure. To the south the Bristol Channel and its islands gleamed in the sun, as did Somerset beyond.

On the way back we took a short sharp descent that curled around the hill’s northern tip and brought us to a valley between the Skirrid itself and the landslip that occurred in the ice age and gave the mountain its Welsh name, Ysgryd, which means split or shattered. We had the second round of sandwiches here and I could easily spend a day reading or writing in the sheltered grove; the ever shifting light under the trees creating myriad shades of green. 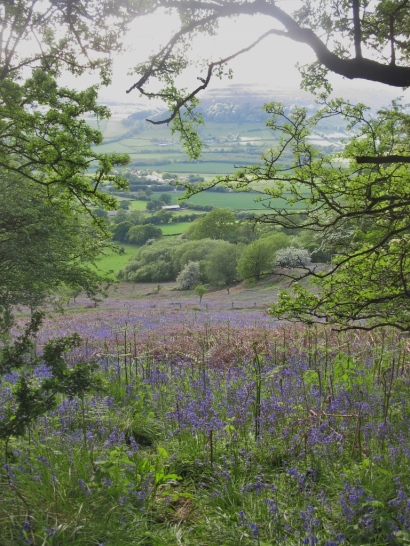 And then we found the bluebells. I had seen a flash of mauve upon the hill as we drove past at a distance, but thought it could have been grey shale catching the afternoon sun. No. It was a carpet of flowers spreading west towards the Sugar Loaf, although as all my photos were taken into the lowering sun I don’t think I did the views justice.

The mountain itself was stunning – it’s shape, the views for miles in all directions, the perfect weather – then we had the bluebells. And then we had a magical Welsh wood. I’ve posted a few pictures of others that have captivated me – and this one was a total surprise. All my previous favourite Welsh woods have been far further from home in North Wales; to find one a little over an hour from home was astonishing. Sadly by now we were all tired and dusk was falling so we mostly kept marching on with me snapping pictures to all sides and not stopping to ohh and ahhh as much as I would like (okay, yes I was already planning how to get there on my own to fully bask in its beauty sometime, sorry family.)

This was supposed to have been posted last Thursday and I was going to say “next week is half term so there will be no new blog post as I shall hopefully be out enjoying more family days like this.” In fact my determination to get a good chunk of my latest wip completed before the holiday delayed this post, but I am pleased to say that even with typical British Bank Holiday weather, we have indeed had another wonderful – and wet – walk. I should be back soon with more pictures – and hopefully that sounds more like a promise than a threat.